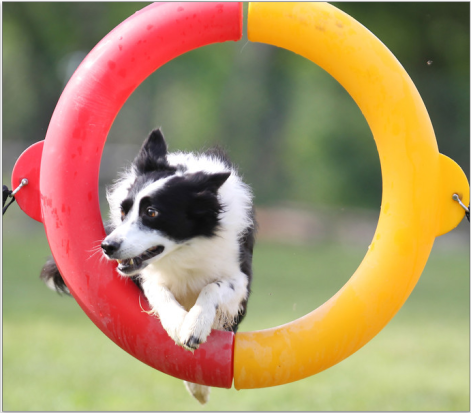 BWBC Rose Above All and Sagehill Likely Legend 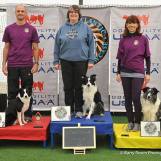 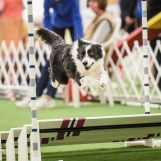 Sequel stretching out over a Long Jump

Sequel at the 2016 Mid-Atlantic Agility Showcase

Sequel taking first in Novice at a USBCHA herding trial

Sequel is from the second litter of the very popular Rosa/Legend cross.  Legend was owned by Janet Gauntt and was a very successful agility dog.  Though Legend is not a Branchwater dog, he does go back to Branchwater lines on his father’s side.

Like his sire, Sequel has proven to be successful earning many titles in flyball (NAFA) and agility (AKC, USDAA) and has also earned many titles/placements in herding (Pro-Novice level), disc dog (SkyHoundz, UpDog),  trick dog testing (AKC), and rally obedience (WCRL).  His primary sport is dog agility where he competes in AKC and USDAA agility.  As of this writing, Sequel is the 10th highest point-earning dog in USDAA history and has earned the following distinctions:  National Top Ten from 2010 to 2016 in multiple Championship categories including #1 Gamblers, #1 Standard (twice), and #2 Snooker). Sequel was again in the Top Ten nationally in 2017 in five Championship categories, taking #1 in Snooker.   He is one of only five dogs to have earned USDAA’s highest title, the Lifetime Achievement Award – Diamond.  Sequel gets on well with people and other dogs, is a thoughtful worker with great drive, and does his best to please.

He has sired one litter: of the four pups, three are in agility homes and are progressing nicely in their agility careers, one being his two year old son Legacy now showing at the Masters level.

Sequel’s titles earned prior to the age of 10: